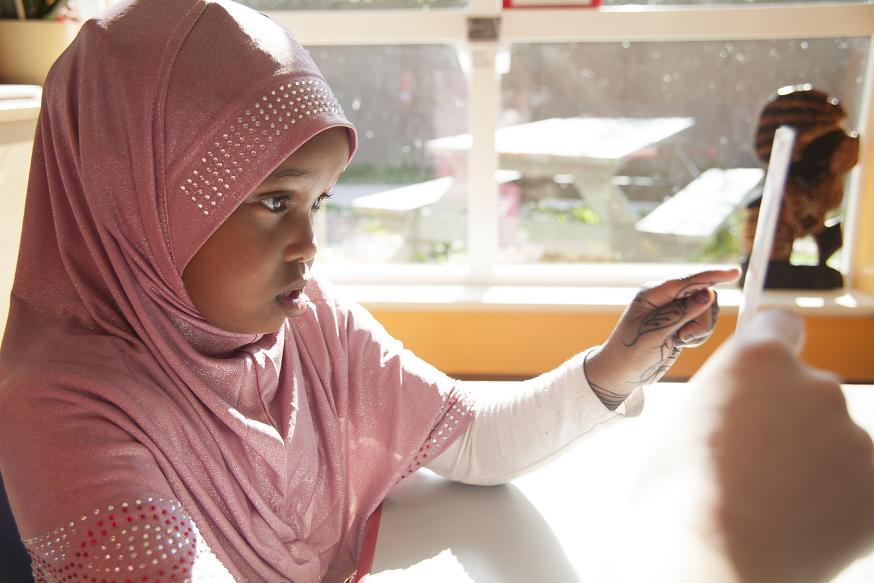 My daughter is going to kindergarten. She’s happy, healthy and well prepared…… I love Tiny Tots and appreciate all that you have done for us.
–          voice mail message from a parent, November 2006

Jacob: Bright, but Bored
“Jacob” had behavioral problems from the time he was a toddler. By the time he entered Pre-Kindergarten at age 4, he was having lengthy daily tantrums. Teachers recall that he was inattentive, disruptive, climbed on everything, and had problems communicating. He shouted in conversations instead of speaking normally and did not listen well. He would not share toys with other children and had poor social skills; he seemed to be in constant conflict with other children and preschool teachers.

Tiny Tots staff successfully used the “Problem Solving Area” to teach Jacob to resolve conflicts. This was a designated area in the classroom where two people could sit down and discuss the reasons for a conflict and find a resolution. Jacob spent a lot of time in the problem solving area with teachers and other children; then something seemed to click. By the middle of the school year, Jacob would suddenly stop himself as a conflict was escalating, and would say, “Let’s go to the problem solving area”. He even began to intervene in conflicts between other children, telling them, “You need to go to the problem solving area”.

Jacob is now in first grade. He loves school, has learned to make friends, and is progressing well academically. His mother reports that his first words upon arriving home are often, “Mom, I gotta do my homework!”

Making the Leap from Preschool to 1st Grade: Tiny Tots Kids Can Do It!

Some children enrolled in ECEAP childcare at Tiny Tots Development Center take the unusual step of going directly from Pre-Kindergarten classes to first grade, as a result of the high quality early childhood education they received here. They have developed the skills needed to pass the admittance tests. When Tiny Tots teachers observe that children are capable of doing work beyond their grade or age level, they encourage the children to do so, giving them more challenging lessons in reading, writing, and basic math. School readiness goes beyond the high scores these students receive; we also believe that and social and emotional readiness are essential for school, and we work to maintain a caring, attentive environment.

Here are the brief stories of two children who went from Pre-K directly to first grade.

A Place Safe from Rage for Gwen

An ugly, angry divorce stirred up emotions that spilled over to four-year-old “Gwen”. The child arrived at Tiny Tots for Pre-Kindergarten in a rage. She cried frequently, tried to bully other children, and sometimes hit staff. Patience, individual attention, and an understanding approach by our teachers helped Gwen’s rage fade away, and soon she greeted staff with hugs. She was able to relax and concentrate on her lessons within the safe space of Tiny Tots. Both her academic achievement and emotional well-being improved. Gwen, now kinder and calmer, is doing well in Kindergarten.

“June”, aged 4, was a foster child who was born to a drug-addicted mother. There were indications that the child had been abused while in previous foster placements. During her first days at Tiny Tots, June would throw objects and destroy things in classrooms. She also attempted to run away at any opportunity. Field trips necessitated the use of a harness, something none of the other children wore. June often appeared angry and sad, and would pull out her hair and eat it. Concentrating on lessons was difficult for her.

Tiny Tots Lead Teacher, Patricia Scarberry, responded to June with loving care and one-on-one attention. She tried to show June that adults could be safe and caring.

One day, when Pat picked up a stray wire clothes hanger from the floor to put it away, and she saw June flinch and cried, “Don’t hit me. They hit me on my feet with that.” Pat assured the child that hangers were only for putting clothes on, never for hitting, and that she would not be hit while at Tiny Tots.

June began to trust her new environment and to pay more attention in lessons. Her social interaction with other children improved, and her self-esteem grew. One day, eyeing the harness before another field trip, she asserted herself.

The harness was put away, and June never ran away from a field trip again.

While she was enrolled at Tiny Tots, June learned to write her name and her spoken and written vocabulary was increasingly notably by the time she was removed from foster care and returned to her birth mother. Sadly, Tiny Tots staff have lost track of June. She did attend kindergarten, and would be in second grade now.

Safe After a Quake

During the 2001 Nisqually earthquake, a group of children from Tiny Tots Main were on a field trip to the Aquarium. They were standing on a pier enjoying the sunshine when it began to sway. Lead Teacher Patricia Scarberry sat the children down and kept up a steady stream of soothing, easy talk, and no one in the group appeared frightened. As soon as the tremors ended, the group returned to the childcare site, where nervous parents waited. The children were doing well and were quite interested in the unusual events of the day. Parents thanked staff for caring for their children and keeping them calm.